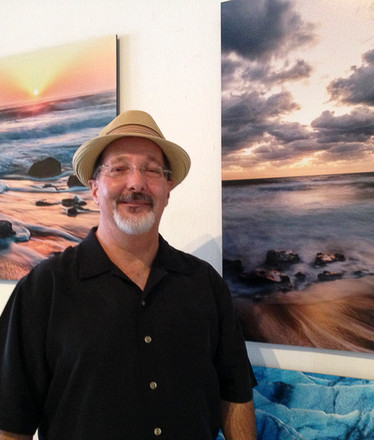 Photography has always been an inherent part of Southern California native Jon Evan Glaser’ life. He first picked up a camera when he was 10 years old, and spent his teenage years behind the lens, until he graduated from high school and turned his efforts to pursuing a career in dentistry. This choice of profession was surprisingly complementary to his love of – and enjoyment in creating – art.

Glaser spent 15 years building a thriving practice in Delray Beach, Florida, taking advantage of the opportunity restorative dentistry gave him to exercise his creativity and artistic abilities, particularly in the preparation of crowns for patients and photographic documentation of difficult cases. Establishing himself as a restorative dentist, until Multiple Sclerosis forced him to retire.

Faced with re-evaluating his career path due to Multiple Sclerosis, Glaser embarked on a new journey that took him back to familiar territory. “I had no idea how much of a ‘tonic’ picture-making would become,” he said. “While in dentistry, I was creating with my hands; with photography I am creating with my mind. The art opened up a whole new world for me, a world in which I can share with others.”

Glaser is a firm believer in learning by doing. This conviction led him to study at the Boca Raton Museum of Art School, Delray Beach Center for the Arts at Old School Square, Palm Beach Photographic Centre.

Master photographers like Jack Wild, Vincent Versace and Lee Gordon, among others, fueled Glaser’s passion for photography, helping him reach new heights. He began to “eat and breathe” the art, and found his own style.

“I ‘broke out’ of my initial way of thinking about how an image is created; there is no mere ‘snap and crop’; there is much involved in the art of photography than that,” he said. “When I embarked on my photographic journey, I struggled to create images of what I saw in nature. It was surprising to learn that the human eye can see 24 shades of light, while the camera is limited to 12.” Glaser found a two-step solution to this challenge: 1) Using a split neutral density filter; and 2) Enhancing his images through Photoshop, to provide proper exposure by lightening the foreground areas that too dark or darkening the areas of the sky where too bright.

Glaser incorporates dramatic weather and foreground interest. Perspective and the play of shadow and light are his primary concerns when composing an image. Many of the photographs in his body of work capture a sense of movement that invites the viewer to be present in the place where the shutter release was clicked, standing alongside the landscape photographer

He has exhibited at many galleries across the U.S., including  Zhou B Art Center in Chicago, Substrate Gallery in Los Angeles,  and the Boca Raton Museum of Art, as well as events in Miami and Monaco.  Glaser’s work has been published numerous times in Black and White Magazine and Irreversible magazine. He has received myriad honors, from Px3 Photography Competition to the Black and White Spyder awards, International Photography Awards and the Boca Raton Museum of Art’s Artist Guild.

There is something fulfilling about capturing a moment in time…particularly as the sun makes its first or last appearance. My fine art photographs reflect an affinity for movement and sound; the latter reminiscent of a song, starting calmly, building strength, power and energy, until the shutter releases and the image is recorded as the ultimate crescendo.

I am drawn to the grand landscape, where I can create images that showcase both the beauty of nature, and the relationship between color and light.

"I have just recently become acquainted with Jon Glaser’s photography. Our world is inundated with photographs of every subject imaginable, but Jon’s work focuses on a single subject - light. I am particularly impressed with the simplicity of his style and the subtlety of his palette. I can walk along one of his sunset beaches or climb in for a paddle into one of his canoe compositions and not drown in punched up, over- processed colors. Refreshingly, his portfolio invites rather than demands a viewing."


NOTE: All photographs have been minimally processed with Photoshop (very minor manipulation/adjustment). Images depict a true representation of both location and visualization. Please contact me with any questions.